Eskom have indeed officially asked for a 25% increase in tariffs starting in April/July this year. This means that prices for a typical houseshold consuming around 1000kwh each month can expect bills over R2000 each month by 2017.

The news broke on Thursday that, handily coinciding with their debt being downgraded to ‘junk’ status, Eskom have asked for a 25% price rise starting almost right away – April for those that buy direct and by July for those that buy via their municipality.

The full submission by Eskom has been handily captured by those cunning guys at MoneyWeb:

We aren’t going to go into the how and why of the tariff rise, lots of other commentators will do that for us. What’s important for you all at home is that your bills will be rising. 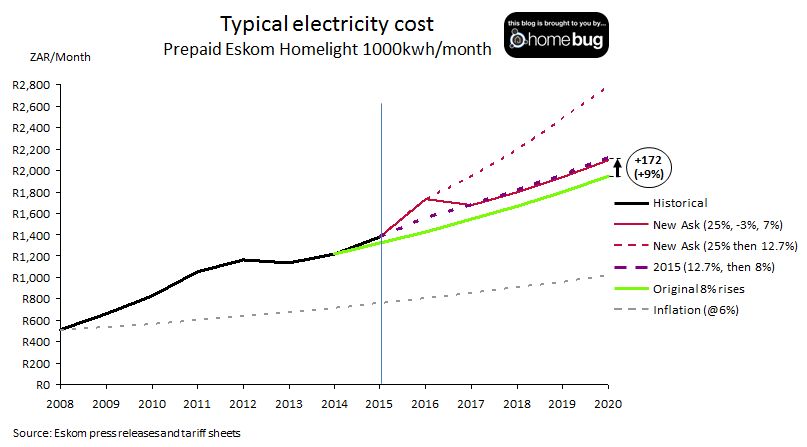 The full detail of the ‘price determination’ as they call it says that Eskom wants a 25% price rise this year, but then a cut next year (of around 3%) followed by an 8% rise the year after. We’ve heard a lot of this before (e.g. just earlier this year they upped the rise from 8% to 12.7%…) so we wouldn’t hold out hope for that price ‘drop’ in 2016.

If prices continue to rise by 12.7% after this ‘super-rise’ this year, by 2020 the typical houseshold will be paying R3000 per month for their electricity.

We at Homebug see the ‘opportunity’ in every crisis and this is no different. Rising electricity prices are only a crisis if there’s nothing you can do about it. But fortunately you can! We all have the power within our grasp to reduce our usage. It doesn’t take huge investments in Solar Panels or heat-pumps (although that can help!) it just takes a concerted effort to really get to know your house.

The price rise of 25% can be completely reversed by cutting your usage by 20% (probably less if you’re on an inclining block tariff). Follow our high level guide “How to Reduce your Electricity Bill” and don’t forget to consider “Filling Up the Tank” before the price rise (the numbers in that last one are out of date, but the strategy still works — once we get approved tariffs from NERSA we’ll try to update them!)

Rising prices don’t have to be seen as a punishment, instead you can view them as an EVEN bigger prize for reducing your usage. Back in 2010 for every unit you save, you only got a R0.50c reward; not you’re getting R1.50 and soon maybe even R2.00 for saving that same amount of energy. The easiest and quickest ways to reduce your usage are:

1. Just not using stuff as much — using less hot water, switching off lights, using your drier less, using less heating and cooling (aircon), reducing your pool pump running time (check with an expert on that!)

3. Start replacing bigger users with more efficient models — cheap things include replacing lights with CFLs or LEDs (focus on the ones that you use all night long before occasional ones); next would be solar water heaters and heat-pumps and/or gas cookers. OId fridges and freezers can be a problem, but unless they are over 10 years old, it’s probably not worth replacing them prematurely (as our old favourite post “Free beer – how that old fridge in the garage costs more than the beer!”)

Give us a shout if you’d like us to test out any energy saving measures — and of course, just like when cutting wood, ALWAYS measure before you cut 🙂 — preferably with a Homebug (homebug.co.za!)