It was a dark and stormy night and not a creature stirred across the entire Cape of Good Hope. Children were wrapped up tightly in their beds and grandpa snorred in the chair. No-one knew what was about to occur… no-one could guess what tragedy was about to befall them.

The light turned red, the gauge began to drop and first a drip, drip, drip… but soon a torrent of electricity credit was flowing from the meter. Welcome to the story of the electricity bump in the night.

Most people don’t really know what their house is consuming in the middle of the night, they tend to assume that when they’re asleep their house and electricity usage is to. But that isn’t always the case. With a Homebug you can watch your electricity meter’s every sneaky move and from it cut out waste that would otherwise go un-noticed. 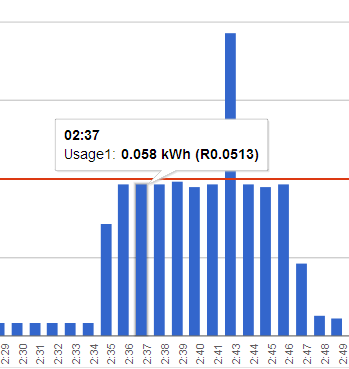 Sudden upsurge of energy use late at night…

One of our customers after installing his Homebug started drilling down into his daily data then into his hourly data and finally into his minute by minute data (shown right) and noticed something unusual. Right in the middle of the night, his house started using energy. And not just any amount of energy – 3.5kW of electricity. As you can see in the graph on the right, this energy usage was lasting around 12 minutes, then shut off again. It happened 4 or 5 times each night and ended up costing around R5 every night.

The customer asked us to help him figure out what was going on, we quickly ruled out the geyser (as our controller didn’t tell it to turn) and we ruled out any late night jacuzzi parties or video game sessions. Eventually, after a few remote tests, we found the culprit – underfloor heating!

It was summer and so there was no need for underfloor heating – so our energy conscious customer turned the thermostat down to what he thought was off. Unbeknown to him, the thermostat wasn’t off, it was just turned down. In the day, the room was warm enough from the sun and outside warm air, but in the middle of the night the room cooled and occasionally caused the heater to kick in. By the morning, the sun was shining and once again, the room warmed up, so whenever he was awake, the heating appeared to be off. With his Homebug and our help he identified the late night energy waster and cut R100 per month off his bill.

Another Homebug saving and another satisfied customer!